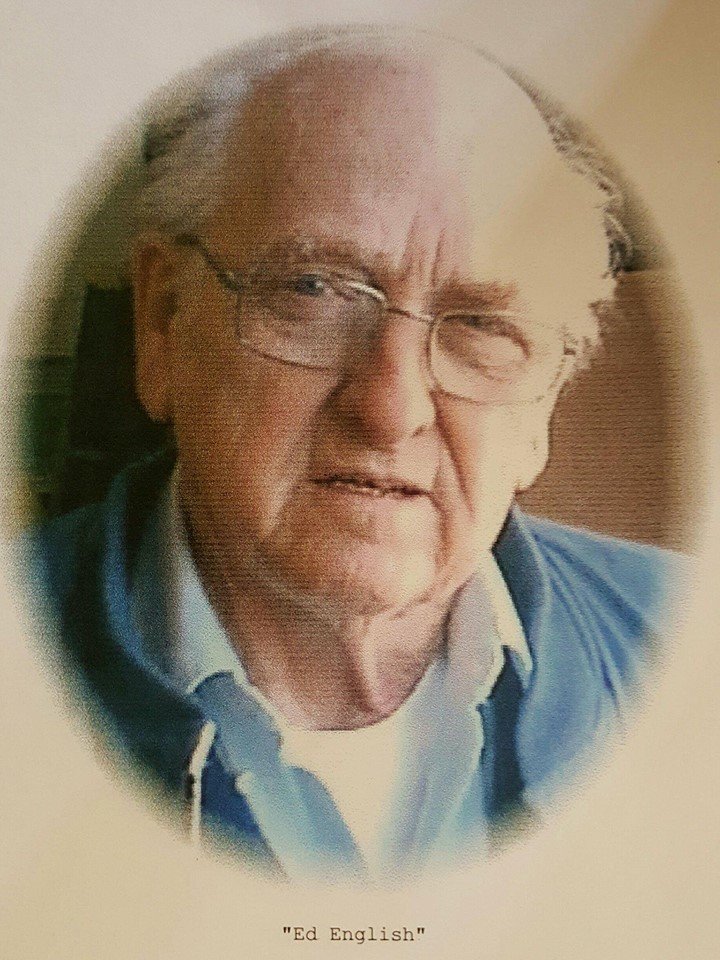 Please share a memory of Edward to include in a keepsake book for family and friends.
View Tribute Book

He married Maxine Schiele on July 5th, 1952 and they had two children, Michael Edward English and David Alan English.

Edward was the founder of Windy Acres Candy & Nut

When you think of the phrase “work ethic”, it should remind you of one of our own small business owners here in Wilmington.  Ed English-the owner of once “quirky deli on 73” (Crabby Ed’s) and his main enterprise, Windy Acres Nuts and Candy, has passed away.  Let me tell you more about our Dad.

Until a few weeks ago that work ethic showed as he pushed his walker slowly into his office to sit on his favorite couch.  At that point questions flowed and he wanted some answers.  With his physical limitations his hands-on approach had stopped but he was still involved with day to day operations seven days a week.  He never missed a day, even as a 3,000,000 mile over the road truck driver in the 60’s, 70’s and early 80’s he never missed work.  There’s a humorous picture hanging in his warehouse with Ed holding a sign that reads “If you’re not at work, you must be dead”.

Work ethic is what he showed his sons and his employees.  The name “Crabby Ed’s” seemed to stick because of his lack of ability to really be mean.  He got crabby, he always said, “Because I’m old”.

However, that never stopped him from being kind, another attribute he had.  He truly was a conversationalist.  Once you talked to our dad a friendship was formed.  His ability to listen and analyze was equal to his verbal communication.  He had a gift with people.  Everywhere he went people were drawn to him.  Once conversations were begun he had them.  He listened intently to those talking and, when needed, he opened his heart and helped anyone in need.

Dad came form very humble beginnings.  His schooling ended after the sixth grade.  Many were the times that he had to fend for himself, often working to get a meal.  At age 16 he fibbed about his age to obtain a driver’s license to drive large trucks.  That is when his trucking career began, rolling up over 3,000,000 miles, all accident free.

We have memories of Mom pressing two pairs of slacks and four dress shirts, readying Dad to be gone for the week.  Yes, he wore black slacks and white shirts every night driving a semi: today that would be unheard of.  To this day we have three books of letters, some handwritten and some typed, from motorists throughout the country writing to thanking him for his help  on a cold night or in a rain storm, or maybe stranded with a flat tire or off the road in snow.  Dad stopped and helped so many change a tire, give a lift and even at times blocked all lanes of traffic with his truck to help at accident scenes, even placing sheets from his own cab over victims.  Caring has always been in his nature.

The company will go on and continue to grow in the direction that he wanted.

Work ethic, heart, drive, and determination, he had nothing to blur his attention to his business.  He didn’t like sports and had no hobbies.  People would ask “Don’t you want to travel?”  His answer was “No, I’ve driven over 3.000.000 miles.  I’ve seen everything”.

It will take his two sons and his three grand children, that he employed to fill his shoes.  The family and the rest of his staff are truly left empty and heartbroken.

The Windy Acres name came from an episode when Ed and his wife Maxine were raking leaves.  Being new to Wilmington, Maxine remarked “Boy it’s always windy here in Wilmington. We should name this place Windy Acres”.

The name Windy Acres, his desk, the signs throughout the warehouse and his walker all will remind us that he has never left and he will always be here.

Edward was preceded in death by his parents: Anice (McWilliams) Hall and stepfather Marquis English, and his wife of many years, Maxine (Schiele) English.

Per Edward’s wishes there will be no services.  Interment of his ashes will be at Hillside Chapel 525 W. Martin Luther King Rd. Cincinnati, Ohio.

To send flowers to the family or plant a tree in memory of Edward English, please visit Tribute Store

Look inside to read what others have shared
Family and friends are coming together online to create a special keepsake. Every memory left on the online obituary will be automatically included in this book.
View Tribute Book
Share Your Memory of
Edward
Upload Your Memory View All Memories
Be the first to upload a memory!
Share A Memory
Send Flowers
Plant a Tree